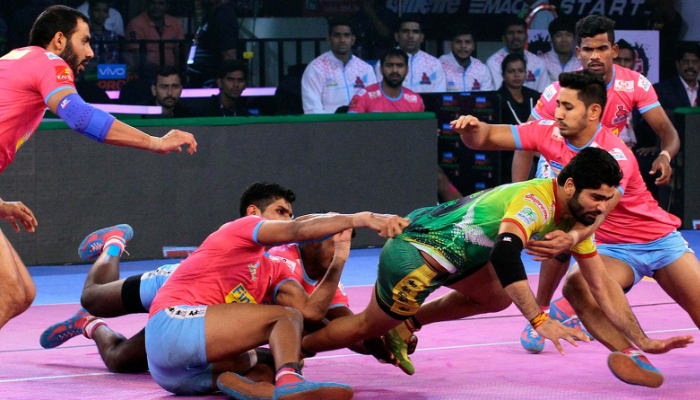 Do you want to know how to become a Kabaddi player?

Kabaddi is a popular sport in India and other countries in South Asia. If you are interested in becoming a kabaddi player, this guide will teach you everything you need to know.

We will discuss the history of kabaddi, how to play the game and the different positions that are available. We will also provide tips on how to improve your skills and become a champion player!

So, let’s get started!

Kabaddi is a sport that has been around for centuries. It is believed to have originated in India and was first mentioned in the ancient Indian epic, the Mahabharata.

The game was originally played by armies as a way to train for battle. Kabaddi eventually became a popular sport played by all members of society.

The game is played on a court that measures 12 x 12 meters. There are two teams of seven players each. The objective of the game is to score points by touching members of the opposing team while holding your breath.

Players take turns crossing into the other team’s half and must touch as many opponents as possible before returning to their own half. If a player is caught while crossing the line, they must forfeit a point to the other team.

The first team to reach seven points wins the game!

Now that you know a little bit about the history of kabaddi, let’s move on and learn how to play the game.

How to Play Kabaddi

Kabaddi is a simple game that can be learned by anyone. The first thing you need to do is find a group of people who want to play with you. Once you have your team, the next step is to find an opponent.

Learn more about How to Play Kabaddi Game

How to Become a Kabaddi Player

Kabaddi is a sport that can be enjoyed by all age groups. If you want to become a kabaddi player, there are a few things you need to do.

The first step is to find a local team or club that you can join. This will give you the opportunity to learn the basics of the game and improve your skills.

You can also join an online community of kabaddi players. This is a great way to meet other players from all over the world and learn new techniques.

Finally, make sure you are physically fit and able to play the game. Kabaddi is a high-intensity sport that requires a lot of energy.

If you are dedicated to becoming a kabaddi player, follow these steps and you will be on your way to success!

Conclusion: How to Become a Kabaddi Player

In the end, becoming a Kabaddi player is not as difficult as it may seem. All you need to do is find a local team or club, join an online community, and make sure you are physically fit to play the game.

If you follow these steps, you will be well on your way to becoming a champion kabaddi player!

We hope you enjoyed this guide on how to become a kabaddi player. If you have any questions, feel free to leave a comment below.

Which academy is best for kabaddi?

There are many great kabaddi academies all over the world. Some of the top academies include the Indian Institute of Kabaddi, the Kabaddi Academy of India, and the International Kabaddi Federation.

What is the minimum age to play kabaddi?

There is no minimum age to play kabaddi. However, it is important to make sure you are physically fit and able to play the game.

How many players are on a kabaddi team?

What is the objective of the game?

The objective of the game is to score points by touching members of the opposing team while holding your breath.

Who is No 1 pro kabaddi player?

There are many great kabaddi players all over the world. Some of the top players include Rakesh Kumar, Anup Kumar, and Ajay Thakur.