In India the general tradition followed is that the occupation or job that the father does, the child is most probable to continue the same path and follow his footsteps.
In this series we look upon some pairs, maybe brothers, father- child pair or husband- wife pair who has contributed to the field of sports.

Dinesh Karthik is a wicket keeper- batsman who currently plays for Team India and is also the captain of the IPL franchise Kolkata Knight Riders. His early days saw him represent Team India in the 2004 U19 Cricket World Cup as a wicket-keeper. He made his senior team debut in late 2004 in Tests as well as ODIs.
He has been a regular member of the Indian Team since then and has decent performances as a batsman. His important role of wicket-keeping was taken over by Mahendra Singh Dhoni who proved to be better than him with the glove work.
Once regarded as a specialist opening batsman, now he bats in the middle order and has earned the tag of a finisher.

His magnificent catch in 2007 T20 World Cup against South Africa was highly appreciated and MS Dhoni felt confidence in him and allowed Dinesh Karthik to keep the wickets while Dhoni fielded for some time. Dipika Pallikal is an international Squash player who is the first Indian to break into the top 10 in the PSA Women’s rankings. Dipika Pallikal played her first international tournament in London when she was in her sixth grade, and won several tournaments on the European Junior Squash Circuit.
Dipika’s mother represented India in Women’s National Team. So the sporting attitude was in her blood itself. 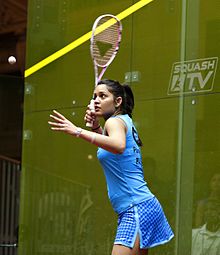 Dinesh and Dipika met each other first at fitness sessions as they took training from the same coach. From that the friendship between the both started to flourish.

Dipika disliked cricket as a sport as it reduced the importance which should be given to other sports and its players.

Both took efforts for each other as Karthik visited Canada after Dipika won a major tournament there and Dipika was started getting noticed frequently at the IPL matches supporting Karthik and his team.

They both have contributed brilliantly in their respective games for the nation and are one of the most iconic couples of this generation.